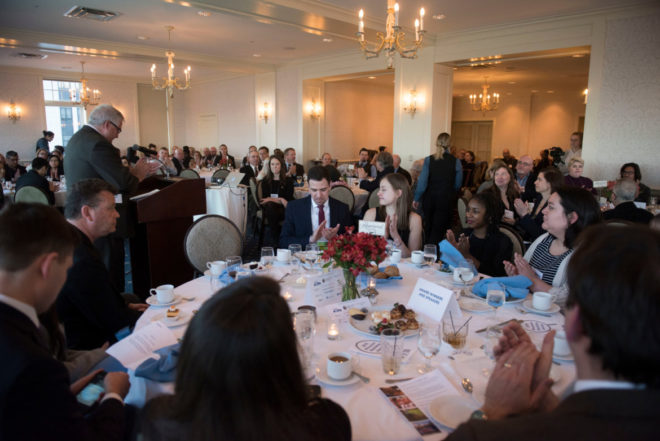 Nominations are being sought for the 10th annual Distinguished Wisconsin Watchdog Award, recognizing an individual’s extraordinary contributions to open government or investigative journalism in Wisconsin.

The award is presented jointly by the Wisconsin Center for Investigative Journalism, the Wisconsin Freedom of Information Council, the Madison Pro Chapter of the Society of Professional Journalists, the Wisconsin Newspaper Association, Wisconsin Broadcasters Association and University of Madison-Wisconsin School of Journalism and Mass Communication.

Letters of nomination are accepted from journalists, news organizations and other individuals and organizations involved in open government and investigative journalism issues. Self-nominations also are welcomed.

Nominations should summarize the individual’s extraordinary contributions to open government or investigative journalism in Wisconsin and provide examples of why those efforts matter. The award may recognize an individual’s achievements over an extended period of time, or within a single year, at the discretion of the selection committee.

Nomination letters should be no more than two pages, single-spaced. Nominations may include a resume and/or a link to clips or a professional website for the nominee. Nominations that did not succeed in previous years are automatically in the running for this year.

Dave Zweifel, editor emeritus of The Capital Times and a founder of the Wisconsin Freedom of Information Council, was named the inaugural winner in 2011 and serves on the award selection committee. The late Dick Wheeler, founder of the Wheeler Report and an advocate for public access to the workings of state government, was honored in 2012. In 2013, U.S. District Judge Lynn Adelman, the chief author of Wisconsin’s Open Records Law and a strong advocate of the Open Meetings Law, received the award.

The 2014 recipient was Milwaukee Journal Sentinel investigative reporter Dave Umhoefer, a Pulitzer Prize winner. In 2015, Journal Sentinel investigative health reporter Meg Kissinger received the honor for tirelessly exposing flaws in the mental health system. In 2016, attorney Robert J. Dreps was honored for being a champion of open government and representing news organizations in groundbreaking cases for three decades. The 2017 recipient was Gilman Halsted, a retired Wisconsin Public Radio reporter who produced award-winning examinations of the state’s criminal justice system. In 2018, the award was given to Raquel Rutledge, a Pulitzer Prize-winning investigative reporter at the Journal Sentinel. Last year’s recipient was Jessica Arp, the former assistant news director and chief political reporter for News 3 Now and Channel3000.com.

The recipient will be honored at the Wisconsin Watchdog Awards reception and dinner, scheduled for Tuesday, April 21 at The Madison Club, 5 E. Wilson St. The reception begins at 5 p.m. and dinner at 6 p.m.

The awards program will be preceded by the fifth annual “Watchdog 101: Essential Skills for Investigative Journalists,” a free, fast-paced workshop for professional and student journalists led by the Center’s award-winning staff.

The workshop begins at 2:30 p.m. with a session on “Tracking the Truth: Investigative Reporting on Elections.”

The public is invited to attend the final workshop panel, featuring recipients of the Distinguished Wisconsin Watchdog Award. “Watchdog Showcase: Victories, Hazards in Investigative Reporting and Open Government” will run from 3:45 to 4:45 p.m.

Sponsorship packages are available for the event. Contact membership manager Emily Neinfeldt at eneinfeldt@wisconsinwatch.org for more information. Proceeds support the Center’s investigative reporting and training of journalists, and also make it possible for students to attend the workshop and awards program.