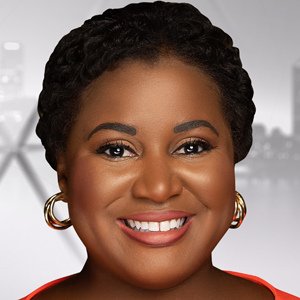 Sandlin replaces Kristen Pierce, who recently took on new duties as weekday co-anchor alongside Derrick Rose for WISN 12 News at 4 p.m. In addition to her role as an anchor, Sandlin will also provide reporting during weekday newscasts.

“From the Midwest, to the East Coast, and positions in the South, Cyreia brings a depth of journalistic knowledge and experience from many cities and communities all across the country,” said Jan Wade, president and general manager of WISN 12.

Prior to coming to WISN 12, Sandlin served as co-anchor of the morning newscast at WTOC-TV in Savannah, Georgia. Along with being an anchor, she has also worked in a variety of news roles such as reporting, editing, and writing at television stations in New York City, Columbia, Missouri, and Peoria, Illinois.

“We are very excited to welcome Cyreia to the WISN 12 News Team,” Wade said. “Her commitment to storytelling that impacts the community is what we strive for each day. We look forward to the contributions she will make for our viewers.”

Sandlin received her Bachelor of Journalism degree from the University of Missouri School of Journalism and graduated with honors. While attending college, Sandlin spent five months studying journalism abroad while living in Brussels, Belgium. This helped build the foundation for her experience in international reporting when she worked for Thomson Reuters Television News.

“I am beyond overwhelmed with excitement to begin the next chapter of my career at WISN 12 News,” Sandlin said. “This station’s commitment to powerful storytelling and breaking news coverage are what every journalist dreams of. After almost 11 years away, I am thrilled to come home to the Midwest, where I was born and raised. I look forward to sharing Milwaukee’s stories and meeting the people who make the communities of southeastern Wisconsin so special. As a longtime supporter of many arts organizations, I can’t wait to explore Milwaukee’s vibrant arts scene.”