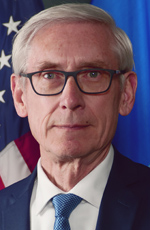 Milwaukee TV station FOX6 (WITI-TV) has filed an open records lawsuit against Governor Tony Evers in Dane County Circuit Court. The suit alleges that the Governor is refusing to provide copies of his emails, unlawfully insisting that FOX6 provide search terms for those emails.

Fox6 investigative reporter Amanda St. Hilaire filed a request seeking all of Evers’ and his chief of staff’s emails over a four-week period. Journalists often file this kind of “spot check” record request to learn who government officials have been communicating with and what they have been discussing.

Gov. Evers denied the request insisting that St. Hilaire provide search terms for her request. The attorney representing the station, Tom Kamenick, said Evers’ staff attorneys have claimed that turning over a block of emails is too burdensome. Kamenick said searching for specific emails would actually require more work.

St. Hilaire tried again, asking for only a week’s emails. That request was denied for the same reason. She asked for a single day of just Evers’ emails, which was also denied despite Evers stating publicly that the public should be allowed to see his emails.  Evers eventually relented on that final request, but still claimed he was extending an “exception” to St. Hilaire and that he could deny a similar request in the future.

“Governor Evers’ denial is unlawful,” Kamenick said. “State law requires requesters to provide a limitation on either time frame or subject matter, not both.  And even if they do need both, the subject matter of this request was emails to and from two identified people.  That’s more than specific enough to satisfy the law.”