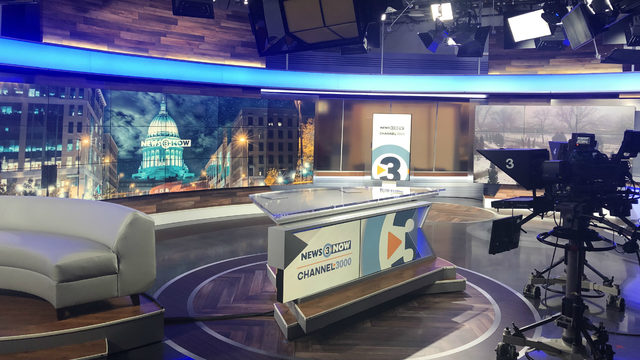 A Madison TV station is unveiling a new look this week.

The changes to News 3 (WISC-TV) include a new set, new graphics, a new brand, and a new focus.

The new brand, News 3 Now, was launched Sunday night, after the Super Bowl. WISC-TV is a CBS affiliate. The brand is aimed at “harnessing the immediacy of Channel 3000 by serving our audience on television more urgent news now.”

“We know our viewers and users are incredibly busy and time is their most valuable resource,” said News 3 Now news director Colin Benedict. “They count on us to alert them when it’s important and provide the depth and context on critical local issues.”

“An etching featured in the set background abstractly represents the dome of the Wisconsin state Capitol — although some have said individual parts of the design also evoke images of sailboats on one of the Madison lakes,” a release stated.

The previous set was launched in January 2001.

What’s new at your station? Send your releases to kgeissler@wi-broadcasters.org.