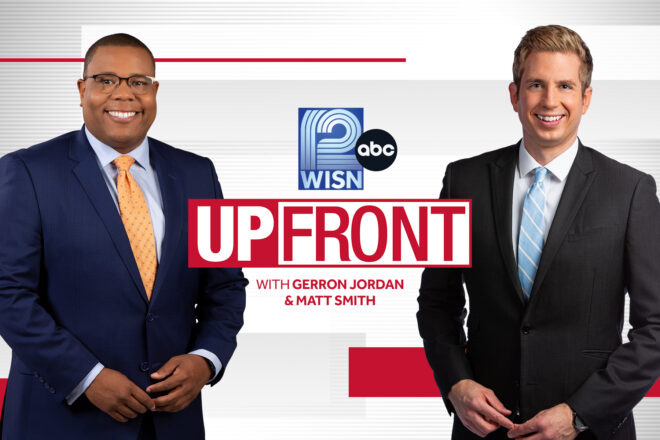 Gerron Jordan and Matt Smith will be the new co-hosts of “UPFRONT.” The weekly public affairs and political show on WISN-TV, which is also broadcast statewide, airs locally on Sundays from 9 a.m. to 9:30 a.m. on WISN 12. Smith has also been named Political Director at WISN 12.

Along with their new roles on “UPFRONT,” Jordan and Smith will continue to perform their anchoring and reporting duties for WISN 12 News, respectively.

Originally launched in 2008, “UPFRONT” is an award-winning program that includes comprehensive coverage of the latest Wisconsin news and politics, in-depth interviews with key local and state officials, and impactful stories that make a difference throughout the state. In addition to airing on WISN 12, it is also carried on other Wisconsin stations including WBAY, WKOW, WAOW, WQOW and WXOW.

“Gerron and Matt are both extremely passionate about Wisconsin politics and important events that impact viewers throughout the state,” said Jan Wade, president and general manager of WISN 12. “Their intuition for connecting the dots between the latest political news and how it affects people’s lives here is pretty unique. They work extremely well together as a dynamic ‘UPFRONT’ Political Team.”

“Matt Smith’s reporting on Wisconsin politics is the best in the state,” said Matt Sinn, news director of WISN 12. “He is relentless in both his pursuit of answers for our viewers and holding politicians accountable.  More often than not, Matt is breaking news during his interviews with Wisconsin politicians of both parties.  Due to Matt Smith’s experience and passion for the politics of our state, we are also elevating him to the new position of WISN 12 News Political Director. Viewers will be seeing more of his essential political reporting across all our newscasts in his newly created role.”

Gerron Jordan began working at WISN 12 in 2021. In addition to being a co-host of “UPFRONT,” he will continue in his role as weekday co-anchor of “WISN 12 News This Morning.” Throughout his career, Jordan has worked in a variety of roles including anchor, reporter, multi-media journalist and producer in Louisiana and Missouri. As an EMMY award-winning storyteller, his work has been recognized by the Associated Press, the National Academy of Television Arts and Sciences – Suncoast Region and the National Association of Black Journalists.

“Gerron has endeared himself to WISN 12 viewers since his arrival at the station,” adds Wade. “And, he has a proven political track record, as was evidenced when he joined 12 News’ anchor Joyce Garbaciak and Matt Smith during our Commitment 2022 political debates.”

“From Washington, D.C. to Madison, politics and current events affect everyone. I’m excited to work alongside Matt to bring complex, but important issues to our viewers in a way that’s clear and relatable,” said Jordan.  “What makes ‘UPFRONT’ so unique is our mission to go beyond the soundbites, unwrap the headlines, and dig deep into what these issues mean for families, taxpayers, and people all around Wisconsin,” he added.

Matt Smith, who has covered Wisconsin politics for more than a decade, is an accomplished political and investigative reporter, who has received numerous Emmy awards for journalistic excellence and other honors including from the Wisconsin Broadcasters Association, Milwaukee Press Club and Society for Professional Journalists. His unparalleled reporting of Wisconsin politics often makes national headlines. Smith came to WISN 12 in 2019, providing important local coverage for WISN 12 News. He currently serves as the executive producer of “UPFRONT,” a role he will maintain along with his new role as co-host. Prior to working at WISN 12, he served as an anchor and reporter in Duluth, Green Bay and Indianapolis.

“The biggest newsmakers in Wisconsin and the country appear on ‘UPFRONT’ knowing our relentless pursuit for fairness, truth and accountability,” Smith said. “On behalf of our viewers and Wisconsin voters, it’s nothing short of an honor to be part of this program’s continued tradition and rich history.”