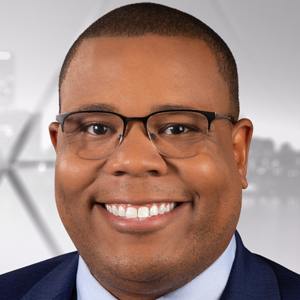 Prior to joining WISN 12, Jordan served as co-anchor of WVLA/WGMB-TV in Baton Rouge, Louisiana since 2017. He also worked as a general assignment reporter in KTVI/KPLR in St. Louis, Missouri. Jordan began his career doing a variety of roles at KPLC-TV in Lake Charles, Louisiana and WAFB-TV in Baton Rouge, Louisiana, including anchor, morning reporter, multimedia journalist, and producer.

“We are thrilled to have Gerron join our top-rated morning team,” said Jan Wade, WISN 12 president and general manager. “He’s a very talented journalist, who enjoys reporting on stories that have meaningful impact, as well as people who make the community special. He’s a native of the Midwest, and we are delighted to welcome him back home.”

Jordan has received several prestigious awards for breaking news, digital media use, and political coverage, from the Academy of Television Arts & Sciences, Louisiana Association of Broadcasters, and Louisiana Associated Press.

“Joining the dynamic ‘12 News This Morning’ family is truly a blessing,” he said. “I can’t wait to join Adrienne, Diana, Lindsey and Matt to bring viewers breaking news, impactful community stories and some lighthearted moments that can put a smile on your face. I’m excited to immerse myself in the greater Milwaukee community and get to know the great people of southeastern Wisconsin.”

Jordan is a native of Chicago, Illinois and graduated, with honors, from Howard University in Washington, DC with a Bachelor of Arts degree in Journalism. Jordan is also a proud member of the National Association of Black Journalists.